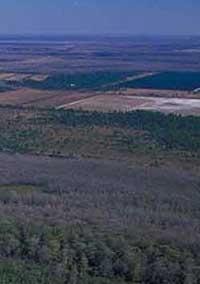 During previous decades, rapid development of Collier County presented challenges in balancing and maintaining a high quality of life for its citizens. While much of eastern and southern Collier County (specifically, Big Cypress National Preserve, Fakahatchee Strand Preserve State Park, Florida Panther and 10,000 Island National Wildlife Refuges, and Everglades National Park) provided ecosystem protection, there remained a need to preserve rare habitats and public open space in the rapidly developing western portions of the county between Immokalee and the coastal areas in order to preserve those qualities that make Collier County the exceptional and distinctive place that it is today.

A series of community planning initiatives, begun in the late 1980s, culminated in 2001 with the Community Character and Design visioning process.  This process identified the need for a greenspace acquisition program.  The resulting initiative, “Vote Conservation 2002” placed a referendum question on the November 2002 ballot, asking voters whether they would be willing to tax themselves one quarter mill for 10 years to buy conservation lands and greenspace and to approve a $75 million limited tax general obligation bond. Nearly sixty percent of Collier County voters responded with a resounding YES! As a result, the Conservation Collier Ordinance (Ordinance No. 2002-63, as amended in 2007-65) was developed, with citizen input and County Commission approval, to make conservation and protection of environmental resources into a real plan for the future.  In 2003, the Conservation Collier Program was initiated.

In November 2006 Voters were again asked in a referendum "straw vote" question whether they understood and approved that the Conservation Collier Program would be funded by a quarter mill ad valorem property tax for a period of ten (10) years, until 2013.  At that time, the Program was expected to raise approximately $189 million as opposed to limiting it to a $75 million program.  Eighty-two percent (82%) of voters approved!  Active acquiaition proceeded through 2010.  At that point, reduced revenues resulting from economic conditions  created uncertainty about future revenues.  As of January 25, 2011, available acquisition funds were committed and future acquisition cycles suspended and the Program entered the management phase. The Program is still authorized to consider bargain sales and land donations under the Land Development Code offsite preservation option.