Stormwater movement is determined by the hydrology of an area. The hydrology is defined by many factors, including the size of the drainage area, its topography and climate, its natural drainage patterns and outfalls, by soil types and ground cover, as well as groundwater and tidewater conditions. 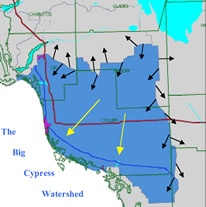 The largest feature of a natural drainage system is the drainage basin, or watershed.   The boundary of the basin is called the basin divide and is created by an upper elevation feature so that the natural land elevation directs runoff from the basin divide (illustrated with black arrows) toward a major drainage feature, such as a stream, lake, bay, or ocean.

The Big Cypress Watershed includes all of Collier County and significant parts of Lee, Hendry, and Monroe Counties.

Collier County has divided the Big Cypress Watershed into sub-basins, also defined by basin divides, as a tool for studying and managing drainage in particular areas.

The topography of an area defines the natural drainage system.   Collier County has a natural terrain that is extremely flat.   From a high point near Immokalee the drainage pattern is south and southwesterly toward the coast (yellow arrows in watershed figure above) with an average slope of one foot per mile (0.0002%).

Stormwater runoff can be defined as the water that flows overland during and immediately following a storm event.   Because of the natural flat terrain of Southwest Florida, stormwater runoff historically follows a sheetflow pattern within a very shallow but wide depression called a slough.

Southwest Florida is subtropical with a distinct wet season and dry season.   The Big Cypress Watershed receives an average of 55 inches of rain annually, with 44 inches in the wet season (June thru November).   Storm events can be intense during the wet season with rain sometimes falling at rates of 6-inches in 1-hour.

Stormwater that does not runoff either sits at the surface and evaporates or soaks into the ground.   The sandy soil of Southwest Florida allows surface water to be readily absorbed into the ground where it then becomes groundwater for use by plants or recharging the aquifer system.   The slow movement of runoff across sandy vegetated soil is ideal for capture of stormwater into the ground.

Under natural conditions then, Collier County has an abundance of groundwater with 99% of groundwater originating as surface water.   As the wet season progresses the ground becomes full of water and not able to absorb more runoff.

Prior to intervention by man, the run-off flowed very slowly through extensive cypress forests and other wetlands developed in sloughs.   In developed areas, this natural condition must still be somewhat preserved, so when groundwater levels are high stormwater still sits at the ground surface in man-made wetlands, ponds, canals and ditches.

Tidal influence on surface water flow is significant here even though tide levels only vary 2-3 feet.   With the flat coastal topography and mild tide, the interface between marine water and fresh water under natural conditions on the flat Southwest Florida coast stretched for miles inland, creating extensive estuarine habitat near the coast and helping to slow the progress of stormwater run-off toward the Gulf of Mexico.

Land within a few miles of the coast often cannot drain at all during periods of high tide.   Thus, developments in these areas must have additional capacity for storing stormwater until high tide conditions pass.